Breaking through the glass ceiling.

Virginia Slims, a top-selling brand of cigarettes in the US, ran a highly successful advertising campaign from 1968 right through to the 80s. For more than 25 years, magazine and billboards across the country bore the image of a powerful-looking woman with a cigarette in her hand and the bold tag line: ‘You’ve come a long way, baby’. Replace the cigarette with a glass of wine, and this could be the perfect image for the huge strides women have made in the world of winemaking over the past 30 years.

When that the Virginia Slims campaign was launched, the concept of a woman making wine was pretty much unheard of – especially in the macho atmosphere of Franco’s Spain. But 1968 was also the year Maria Martinez, now head winemaker at Rioja’s Bodegas Montecillo, began a postgraduate degree in winemaking. “I was studying philosophy and I started working in a winery to make some money to support myself,” says Martinez. “I fell in love with a wine, a fantastic Rioja from 1928, and it made me want to change career. My mother, in particular, was disgusted with me when I made the move – she and my father wanted me to be a university lecturer.” 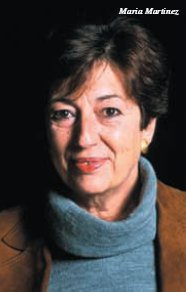 Martinez already had the exam grades necessary to win her a place on the winemaking course at Valencia University. She was, naturally, the only woman studying the subject. She graduated in 1970 and began her career as a winemaker. “In those days the culture was very different to today,” she says. “Wine was a man’s job: it certainly wasn’t what a nice girl should be doing – and it wasn’t the recognised opportunity it is nowadays. I had to fight hard to get any respect.”Martinez moved on to Bordeaux, where she worked for the Cordier family at their properties in St Julien and the Haut-Médoc. On her return to Rioja, her growing reputation as a winemaker won her a job at a big bodega, where she acquired a reputation for making top quality, ripe, fruit-driven wines.

A medium-sized fish in a large pond, Martinez jumped at the opportunity offered her by the Osborne family in the mid-70s to head up a team of winemakers at their newly purchased Bodegas Montecillo, where she still works today.

Thanks to pioneers like Martinez, Zelma Long, Helen Turley, Jenny Dobson and Lalou Bize-Leroy, women who want to make wine their career no longer face society’s implacable opposition. In fact, according to Jancis Robinson MW, “A steady stream of women winemakers over the last 20 years has become quite a torrent this century.” Paz Espejo is one of them: a woman who has fought her way to a commanding position in this once-male preserve. Coincidentally, Espejo is not only a countrywoman of Martinez’s but is also technical director for Martinez’s former employers, the important Bordeaux house of Cordier. 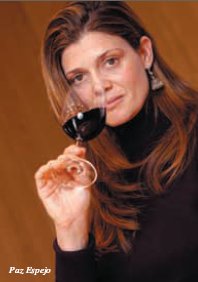 A scientist by training, Espejo was unfulfilled by the thought of spending her days isolated in a lab, so she went travelling after graduation. She was on a voyage of exploration, hoping to discover a career that would allow her to work in a natural environment, travel and meet people. While she was in France, a casual conversation led to a growing interest in winemaking, and she signed up for a postgraduate course at Bordeaux University.”My first contact with winemaking was a tasting at the university,” she says, “but I immediately felt at home. I still feel that winemaking chose me rather than the other way round – and the fact that it has done so makes me feel incredibly lucky.”

On graduating, Espejo worked with flying winemaker Peter Bright in Spain and Australia, then taught winemaking for a while before moving on to make wine for Bordeaux négociant Calvet in 1997 before taking up the reins at Cordier in 2003

“I’m now Cordier’s technical director,” she says, “which means I’m in charge of buying in wines, blending and vinification for our brands, as well overseeing the winemaking teams who work at our properties in Pauillac, St-Estèphe and Sauternes.

“But there’s another aspect to my job,” she explains, “one in which I become an ambassador for our wines. It’s interesting because I get to listen to what people have to say, and that makes me ask myself tough questions. The result is that we will respond to demand, and that must make for better wines.”

Jane Wilson is another scientist-turned-winemaker whose choice of career turned on a chance encounter. “I grew up in Scotland and qualified as a vet in 1982,” she says. “It’s one of those careers where you work like mad to qualify, then when you have passed all your exams you wonder what you’re going to do with it all. I went out to Australia as a jobbing vet in 1986 and met Len Evans at a party. I’d mentioned my frustration with my work, so he invited me to come out and work the vintage at Rothbury Estate.” Wilson turned up at Rothbury, unaware that head winemaker David Lowe had not been informed about her arrival. 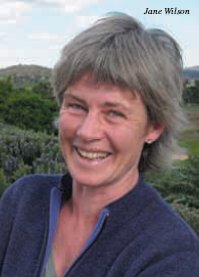 “Len was always inviting people to come and work at the winery and forgetting to tell David,” she laughs, “but luckily for me, four people had gone off sick just as I turned up, so I was welcomed with open arms.”Undaunted by the hard physical labour involved in winemaking, Wilson initially had problems adapting to the creative demands of the job. “I just couldn’t get my head round the way your decisions in the field come out in the glass,” she says. “I thought it would be science first and tasting after, but I soon found out it was the other way round, which I thought was extraordinary. Even if you like eating good food, you don’t make commercial decisions based on how your sauce tastes unless you’re a top chef.”

Her fascination with such paradoxes led Wilson to stay on in the world of winemaking, and she and Rothbury’s former winemaker, David (who she later married), now make wine on their own estate, Lowe Wines, which is based in the up-and-coming Mudgee region.

Meanwhile, down in South Australia, Yalumba’s Louisa Rose is representative of a relatively small handful of women who were born into winemaking. “My family grow grapes in the Yarra Valley,” she says, “so although I initially took a physics degree in Melbourne, I ended up studying at Roseworthy” (Australia’s top wine college). 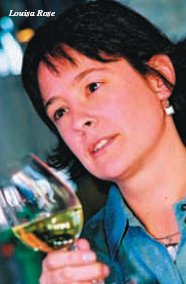 As part of her course, Rose had to do a vintage somewhere and ended up on the night shift at Yalumba. After a second vintage at the winery, she was offered the job as assistant winemaker to Geoff Linton and, when he moved on in 1995, Rose took over responsibility for both sparkling and whites wines, but has focused exclusively on the whites since 1998.”I’m responsible for all the whites, but my focus is mainly on Viognier and Riesling,” she says. “The company has been making the Pewsey Vale Riesling since 1969, so it is very important to make the style consistent, but with Viognier we started from scratch. It’s my passion – we look to the Rhône wine Condrieu for inspiration, because its great wines are worth idolising.”

Rose may well idolise the wines of Condrieu, but she is very much an Aussie girl at heart, and is aware that the forward-thinking attitude of Australians has been an advantage to her and her fellow women winemakers. “Being a woman has certainly not hindered my career,” she says. “There’s no prejudice in Australia – it doesn’t matter whether you are a man or a woman, as long as you can do the job.”

Martinez isn’t so sure that attitudes have changed that much. “Even now there’s a lot of discrimination against women,” she says firmly. “Once you have earned some respect everything is easy, but you have to be prepared to fight hard for that respect at the start of your career. It’s much easier than it was, but it’s still a male-oriented industry.”

Paz Espejo is more sanguine about the prospects for women in her industry. “When I started it was quite tough, and men saw us as being less capable,” she admits. “You have to be physically strong to move barriques, and some people seemed to think that there was a link between our physical power and that of our wine. There is now a growing realisation that winemaking isn’t just about that; that winemakers are people who taste and advise, and that women can do that just as well as men. In short, I think those who are starting out now have an easier time than my generation did, but we, in turn, had an easier time than those who came before us.”

“In Australia there’s no glass ceiling,” Wilson agrees with Louisa Rose at Yalumba. “As long as you can hold your drink and do the labour, no one has any prejudices against you. I find the difference lies in our appreciation of different styles – men often make quite ‘blokey’ wines: bigger, bolder and with more oak. I don’t like wines that are built to win medals on the show bench, and prefer something with a bit more subtlety.”

All four women agree that women bring something different to the art of winemaking – but whether or not you label that difference as ‘femininity’ is moot. “I think women are sensitive to different things than men,” says Espejo.” I also think, on the whole, that women pay more attention to detail; that we’re better at deconstructing something, and analysing each individual element to create a more harmonious whole.”

“Women are definitely more sensitive to particular tastes and smells,” asserts Martinez. “In general we tend to like natural flavours more, and make wines that are more fruit-oriented, with less oak: wines that are more alive. Women are, generally speaking, more subtle.” With a mischievous twinkle in her eye, she adds a little further clarification: “Perhaps women are more subtle not only as winemakers, but in a wider context.”