Be quick if you want to get along to what looks like a really fun evening in London on Thursday May 8th 2014. The anti-poverty charity ActionAid invite you to to join them for an evening of wonderful wine, food and celebrity entertainment to raise funds for ActionAid’s SheCANâ€¦ appeal to help women overcome the dual effects of violence and poverty. All funds raised on the night by UK individuals will be matched pound for pound by the UK government.The evening will be hosted by Sky News anchor Dermot Murnaghan, who will be joined by panellists Fay Ripley, Hardeep Singh Kohli and Josie Lawrence who will contribute their sharp wit to the proceedings in a Call My Bluff format blind tasting. An auction on the evening will include a week’s stay in a luxury private villa in Majorca, an exclusive box at Wembley to see One Direction, a year’s supply of wine and an ActionAid trip of a lifetime to Vietnam. Tickets start at £295pp or £2,750 for a table of 10. Thursday 8 May 2014, 6.30pm-11:00pm, Gibson Hall, Bishopsgate, EC2N 3BA. Tickets and info from www.actionaid.org.uk/winebluff.

Sorry about the atypically (for wine-pages) shouty headline, but I guess that’s what the organisers of the ‘Concours Mondial du Sauvignon Blanc’ want to convey with their press release showing that the Kiwis failed to lift any of the trophies on offer in the 2014 competition. All four trophies on offer (‘oaked blend’, ‘oaked varietal Sauvignon Blanc’, ‘unoaked blend’ and ‘unoaked varietal Sauvignon Blanc’) went to wines from France, though the latter was shared with wines from Spain and Italy. I note that of 64 judges, 34 came from France and one from New Zealand. The competition was held in Bordeaux.

The story of US real-estate millionnaire Julian LeCraw, suing Britain’s Antique Wine Company (AWC) and its CEO Stephen Williams for selling him fake wine, has made the mainstream press in the last week or so. That’s probably because the law suit, filed in Atlanta, Georgia, is reputedly seeking over $25 million in damages. LeCraw claims a bottle of 1787 Yquem he purchased for $100,000 is a fake, as well as several bottles of Lafite-Rothschild and of Château Margaux. He also alleges non-payment of several million dollars that AWC owes him for wines he consigned to the company for sale. Stephen Williams (right) issued a statement which said: “In view of certain incorrect statements which are circulating in the media and online, The Antique Wine Company finds it necessary to emphasize that it duly researched the provenance of the wines it supplied and fully disclosed that information to Julian LeCraw Jr. at the time of his various purchases. We provide below some examples of the diligence exercised with respect to the most prominent bottles in the dispute.” Those examples include a letter issued by Château d’Yquem which described the bottle and confirmed that their cellarmaster had re-corked and relabelled it, and that this authenticity of the letter had been verified by Comte Alexandre de Lur Saluces, former owner of the château.

It really surprised me on my first visit to Hong Kong a dozen years ago to walk into an extraordinarily well-stocked wine retailer, to find bargain bins crammed with top German and Alsace Riesling and Gewürztraminer. With these wines such natural partners to Oriental cuisine, the fact that big red wines were being sold at a premium seemed to defy all logic. But a charm offensive has just concluded, code-named ‘A Riesling Revolution’. It saw Etienne Hugel of the Hugel family, Ernst Loosen of Dr. Loosen Wines and Peter Barry of Jim Barry Wines (the males in the photograph from left to right) join forces with their Chinese importer to “challenge the reign of red wine in China.” For a week the group conducted tastings, masterclasses, and media events across the region, starting in Macau and ending in Beijing. Etienne Hugel said: “This tour will bring awareness of the great qualities of Riesling to a whole new level, and reinforce that these white wines are actually ‘Golden Wines’, not just plain white wines!” 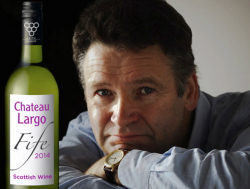 Bloomberg recently reported that the effects of climate change have made it possible for Scotland-based chef and cookery writer Chirstopher Trotter to ripen grapes and make wine from his vineyard on the northern side of the Firth of Forth opposite Edinburgh, in the Fife village of Upper Largo. He cites a climate change expert who told him the Scotland could soon have a similar climate to the Loire Valley as his inspiration, though he has planted the early ripening German varieties Solaris and Siegerrebe rather than Sauvignon, and red grape hybrid Rondo rather than Cabernet Franc. So far the vineyard has only 200-vines, but July temperatures last year averaged 21.4ºC leading to excellent growth. Trotter told Bloomberg that if the experiment is successful he will look for investors to plant his 2.4ha site. 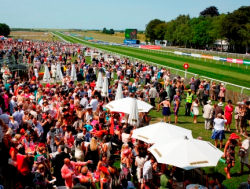 Moët & Chandon is the new title sponsor for the July Festival of racing at Newmarket racecourse. This sees Moët & Chandon expand its international sports sponsorship portfolio, by taking on the three-day meeting. By coincidence, 1750 is both the year The Jockey Club was founded, and the year Moët exported the first bottle of Champagne to Britain. Moët & Chandon already holds a royal warrant to supply Champagne to one of horse racing’s biggest fans, The Queen, and employs Roger Federer as its brand ambassador.Amy Starkey of Jockey Club Racecourses said: “We are looking forward immensely to working with one of the top brands in the world to develop further our fantastic summer festival of horse racing.”

…drink wine, at least when out in the pub with mates according to a study of 1,500 adults commissioned by Côtes du Rhône wines. The survey showed that whilst nine out of ten men will drink wine in their own home, just one in four say they would drink wine while on a night out with male friends – for fear of being made fun of. A spokesman for Côtes du Rhône said: “A large number of British blokes now say they enjoy a glass of wine when in their own home, but the majority still swap their Paris goblet for a pint pot, or order a spirit and mixer when out with friends in the pub, at a party or in a restaurant.” Paris goblets aside (is that really what Côtes du Rhône think most people use at home?), the unnamed spokesman went on to add that, “At parties the number increases slightly, and in a restaurant than figure rises to just over half.”