One of the best-known names in all of Champagne, the house of Bollinger has released vintage Champagnes for almost 200 years – its first vintage release dating back to its foundation in the village of Aÿ, in 1829. Indeed, on a recent visit one of the highlights was learning about ‘Galerie ’29’:  in 2010, whilst taking an inventory, an abandoned wine cellar was discovered hidden behind a wall of empty bottles. Containing long-forgotten bottles and magnums of reserve wines, deciphering the inscriptions allowed the team to determine the origins and vintage of certain batches, for example an 1886 Le Mesnil-sur-Oger, an 1893 Verzenay and a 1914 Aÿ.  With the help of archive research one parcel proved to come from the 1830 vintage – one year after the house’s foundation.

Invited to visit for the launch of the much anticipated 2008 vintage (my tasting note already reported here), I didn’t get to taste that 1830 bottling, but in an extraordinary tasting prepared by cellarmaster Gilles Descôtes, I was priviliged to taste not only the 2008 in bottle, magnum and jeroboam, but a selection of vintages back to the 1918. 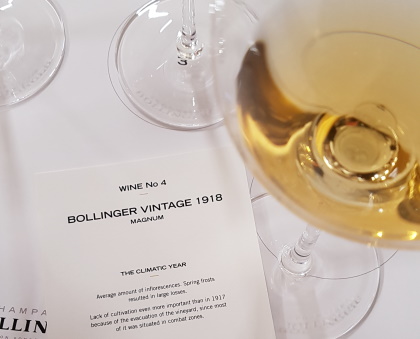 One hundred years on from the grapes being harvested, it was one of those moments when the wine might be (and was) sublime, but one’s mind immediately grasps for the context, which does not come much more significant than the signing of the Armistice treaty in November 1918, bringing the Great War to an end just as this wine was beginning it incredible story.

Bollinger famously ferments all of the base wine for La Grande Année in barrels. 3,500 small casks are aged between five and 35 years old, with an average age of 20. The barrels come from Burgundy – some from Chanson, which is part of the same group, but also from Domaine de la Romanée-Conti, Drouhin, Jadot and other famous names. Intriguingly, I also learned that Bollinger owns its own cork forest in Cuis, a village in the Côtes des Blancs, and has begun to cooper wood from these. Having seasoned the staves for the past three years, between 20 and 30 barrels from this forest would be used to ferment part of the 2019 harvest.

Old barrels is one of the secrets to the Bollinger style. We also got to taste wines from an experimental project – though to be honest, I suspect the experiment was meant to prove, rather than change, the house philosophy on barrels: we tasted the same wine that had been raised in a 20+-year-old barrel, a new barrel and a stainless steel barrel. There was no doubt my favourite sample was that from the older barrel, the new barrel marking the wine too firmly with vanilla aroma and flavour, whilst the steel-aged sample lacked something in terms of vinosity and fruit richness.

Most of Bollinger’s 178 hectares of vineyard are classified Grand or Premier cru, and Pinot Noir dominates – also making up 71% of the 2008 La Grande Année. Over 700,000 magnums resting in the cellars give an extraordinary library of of reserve wines for blending, and for Grande Année all riddling is by hand, as is labelling. Gilles explained that the dosage for the 2008 was “nothing complicated” – a blend of 2008 wine and sugar.

Don’t try this at home: the precise art of remuage, or riddling: encouraging the spent yeast cells to slide into the necks of the bottles prior to disgorgement.

We began with three wines, from 1983, ’89 and ’92, all disgorged on the same day in December 2018, all with 8g/l dosage and served from magnum.  We then moved on to that spectacular 1918 magnum, which was disgorged in 1969, before finishing with a tasting of the 2008 which we could also appreciate over lunch, poured from the three formats. For me, the 2008 from magnum had more sense of depth and sumptuousness, but really vibrant fruit; obviously the same wine as in bottle, but the expressive dial notched up just half a point. The jeroboam (double magnum) was fabulous again, a little tighter and more obviously youthful in character, a nutty reductive note apparent, but with mesmerising, streaking freshness.

(2019) From magnum: a fine summer and mild autumn compensated for a difficult spring and delayed growing season. A blend of 70% Pinot Noir and 30% Chardonnay, disgorged December 2018 with 8g/l dosage. Fine copper tinged colour, this has a lovely creaminess and developed character, but is very fresh, quite custardy with a touch of coffee and hazelnut, a touch of truffle too. The palate has great freshness, a direct lemon character, a sour thrust of acid driving the lightly earthy, nutty richness. Price quoted at time of review is for 75cl, and not this disgorgement.
(2019) From magnum. A complex year with early budding but violent hail storms, but a very good summer and low yield. 69% Pinot Noir and 31% Chardonnay, disgorged December 2018 with 8g/l dosage. Creamy without the more developed hazelnut and coffee nuances of the 1983. Delightful richness, nutty apple and some exotic notes with glimpses of papaya and spiced orange. On the palate it has great length and that mouth-filling creaminess, there is some toast and buttery Brazil nut richness that fills the finish to join lovely sweetness of fruit and racing acidity. Fabulous wine. Price quoted at time of review for 75cl and not this disgorgement.
(2019) From magnum. The hottest year since 1962, but also rainy which helped soils in water deficit. Dry September suited Chardonnay in particular. 65% Pinot Noir, 35% Chardonnay, disgorged December 2018 with 8g/l dosage. Quite a glowing golden tinge to this. Rounded, arguably slightly more attenuated, not the direct creamy elegance of the 1989, but has fine biscuity character, a yellow plum fruitiness, but the palate stretches with the rounded, sweet fruit mid-palate and again very good acid balance. Long and shimmering, though the 1989 wins for its exquisite length and balance. Stockist at time of review is for 75cl and not the same disgorgement.
(2019) From magnum, and tasted and scored blind. Spring frosts resulted in large losses and extremely low yields. There was a lack of cultivation in 1917 and 1918, the vineyards sited in combat zones. Cepage unknown, disgorged 1969. Deep, burnished colour. Clearly very old. Like and older white Burgundy, with waxed parcel string, nutty apple and hints of truffle and toffee. Fabulous sweetness and a trace of bubbles on the palate. The palate filled with sweet fruit, clearly very old, but there's a freshness here from magnum, a hint of buttery Brazil nut fat, and that sweet finish of both fruit and, I suspect dosage, but wonderful and still showing great balance. Turns out to be the 1918 vintage. Pinot Noirs from Bouzy and Aÿ, almost no Verzenay because Phylloxera had decimated the vineyards, Mesnil sur Oger for the Chardonnay. Not available to purchase.
(2019)

This tasting note comes from the launch of the 2008 vintage of La Grande Année at Champagne Bollinger's cellars. A full report on an extraordinary event and other wines tasted will follow. The blend is 71% Pinot Noir, 29% Chardonnay from 18 crus, mostly Aÿ and Verzenay for the Pinot, Le Mesnil-sur-Oger and Cramant for the Chardonnay. The wine has 8g/l of residual sugar. Super fresh, intense and tight at this stage, gentle creamy autolysis from nine years on lees, lovely delicate truffle and floral notes, subtle nutty apple and creamy fruit in a wine that is tightly-wound, but just hints at hazelnut polish and depth. The palate is sweet-fruited and has an apricot and peach flesh juiciness, it is also long and beautifully fresh with a shimmer to the acidity. This is a taut and vital Bollinger LGA, fabulous concentration and surely destined to be a great wine within the considerable lineage. Tasted from magnum the immediately has more sense of depth and sumptuousness, but so incredibly vibrant. Obviously the same wine, but the expressive dial just notched up half a point. And tasted from jeroboam, superb again, a little tighter and more obviously youthful character. So nutty, the reductive notes very apparent, but tight and fabulous streaking freshness.  Note that the wine will sell-out very quickly.