If the name Deutz is less familiar than some of Champagne’s other Grand Marque houses, it has nothing to do with the quality of the wines.

In the UK Deutz has a substantial presence, but historically the domestic market has been in love with the refined and supremely elegant style of the house, and enthusiastic French Champagne drinkers have accounted for a great deal of its production. I suspect Deutz is making even more of an effort to introduce its wines to British Champagne lovers since the company was purchased by the Rouzaud family, who own a number of estates including Champagne Louis Roederer, in 1993.

Deutz is one of Champagne’s oldest Grands Marques, founded in the village of Aÿ in 1838 by German immigrant, William Deutz. The belle epoque family home is now the Deutz HQ and from one of its ornate reception rooms, a secret doorway opens onto a tunneled staircase leading down to three kilometres of chalk cellars.  Directly above the cellars lie some of Deutz’s prime estate vineyards and a more modern winery. That makes Deutz quite unsual in having HQ, winery, cellars and vineyards directly connected to each other. I visited Deutz late in 2017, already a fan of their Brut Classic and Rosé, but keen to discover more of their wines and their story.

I was greeted by Jean-Marc Lallier-Deutz, direct descendent of William, who grew up running around the family home and who is now an ambassador for the company. He’s photographed left in front of the vineyard known as ‘La Côte Glacière’.  “The family house has been preserved in the same style, and is a perfect instrument to prove our long history,” he says, surveying the portraits of six generations of Deutz hung around the walls. Jean-Marc explains that in terms of winemaking Deutz is run entirely separately from Roederer, but since 1993 production has increased from one million, to 2.5 million bottles per year, about 45% of which is now exported.

Jean-Marc is a walking encyclopedia of Deutz history, and tells me that Deutz was “an original member of the Syndicat des Grandes Marques in 1882. Their challenge was to put in place technical rules to improve and protect Champagne against global sparkling wines. Those 45 rules were basically the invention of France’s wine appellation system.”  He stops before a portrait from around 1890 of English politician and businessman, Lord Parkington, who became a great advocate for Deutz in the UK. “Deutz became one of the top five Champagne Marques in Great Britain,” he says, “but their German origins meant they fell out of favour after the Great War and following depression.”

Today, Deutz is a substantial vineyard owner with 42 hectares of its own vineyards, but in common with almost all Grand Marque houses, it has historically bought the majority of its fruit from growers, which gave much more flexibility. “We are négociants with great relationships with our growers,” says Jean-Marc, “and our Deutz staff take great care of our growers, both professionally, technically and personally. All of our growers come from within 30 minutes of the winery.”

The vast majority of thoser growers are in the Côte des Blancs, south of Epernay and planted almost exclusively to Chardonnay, the Vallée de Marne further north and planted mostly to Pinot Noir, and a little comes from the Montagne de Reims, further north again and also a Pinot Noir stronghold. Jean Marc says: “Although we buy from many Grand Cru and 1er Cru vineyards, we are far more concerned with selecting exactly the right components. In that respect, who cares what ‘label’ is on them: we are looking for growers who respect whatever terroir they have, and make the best wine from it.” Long- serving Cellarmaster Michel Davesne and his winemaker, Cédric Georget, ‘orientate the growers’, with a helpline service and regular seminars and training sessions.

By this time we have been joined by Cédric and Michel (left and right of picture), and Cédric explains: “We put a huge emphasis on selecting only grapes in excellent condition. In 2017, 30% was rejected in the vineyard, because the quality was not good enough, the grapes too dilute because of rain at harvest. One of our own staff oversees all picking, with all growers.”

We climb the stairs from the cellars and emerge immediately into a vineyard called La Côte Glacière that runs behind the winery, just under two hectares of 45-year-old Pinot Noir, classified as Grand Cru. Sited on a steep slope, it produces very small berries and was originally around 10 very small gardens that William Deutz managed to acquire.  Nearby is Meurtet, another Pinot vineyard of around 2.4 hectares, and these two  vineyards are one of the reasons I am in Champagne. 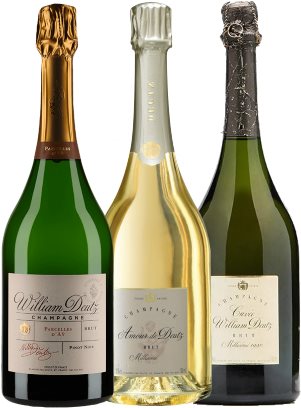 Deutz was just about to unveil ‘Hommage à William Deutz 2010 Parcelles d’Aÿ’, a new addition to their Prestige level, a Blanc de Noirs made only from these two vineyards which have historically yielded some of their best quality fruit. From the 2012 vintage there will be two ‘Hommage à William Deutz’ bottlings: single vineyard wines coming from each of the parcels.

The first release of the Hommage cuvée sells for around £95 pounds, so that’s priced slightly lower than the signature deluxe cuvée, William Deutz, and the more expensive Blanc de Blancs and Rosé wines that appear under the Amour de Deutz label. Around 6,000 bottles of Hommage #1 were produced.

Deutz is one of relatively few Champagne houses that uses only the most delicate first pressing of the grapes, the tête de cuvée, selling-off the taille, or second-pressing, which most houses incorporate to give intensity to their wines.

All wines are made in temperature-controlled stainless steel tanks, and the house style does not rely heavily on older reserve wines. “It’s all about freshness,” says Michel with a shrug, explaining that the reserves are young, but that they use a big proportion of them in each blend. For example, the current NV Brut Classic is a 2013 base, but 35% comes from the 2012 vintage and is the only reserve wine in the blend.  All wines go through malolactic fermentation, so although they are precise and delicate, they are not austere.

I have to say I was extremely impressed by the tasting below, from the delicacy and quality of the regualr classic Brut NV, through to some stunning aged examples of the Prestige Cuvées. Deutz is a Champagne producer making supremely refined wines, and as the new Hommage wines testify, they show a willingness to explore the potential of their vineyards while carefully protecting the ethos of the house.

The wines of Deutz are distributed in the UK by Gonzalez Byass UK, and those attending my Festivals of Wine in 2018 will discover a Deutz table at each of the Festivals, plus lucky ticket holders will attend a masterclass at the Glasgow and London events where several vintages of William Deutz plus the Hommage will be poured.

(2018) There is 35% of reserve wines in this cuvée, and a dosage of 9g/l. Quite a developed yeastiness, with lots of russet apple, nutty and juiciness, but then white flower and nettle. Very delicate, a gentle mousse, with lovely orangey acidity and fruit freshness, very crisp and tapering. Whilst dry, not austere.
(2017) Deutz rosé is mostly PInot Nor from the Montagne de Reims, with a touch of Chardonnay. It has a very delicate and attractive peachy-pink colour, the nose creamy with small red berry fruits but a certain biscuity note too, not always found in pink Champagnes. In the mouth it is vibrantly packed with reducrrant, raspberry and crisply defined dry red fruits, but it is ripe and sweet-edged too, the delicate mousse and fine acidity balancing beautifully. With a touch of chocolate or coffee adding roundness, the finish is quite intense, but never losing that elegance and delicacy.
(2017) For Deutz, a brand new prestige wine to the Portfolio as of October 2017. It is 100% Pinot Noir from Aÿ, and comes from two vineyards, La Côte which lies immediately above the cellars, and Meurtet. In future single vineyard bottlings from the 2012 vintage will appear from each vineyard as part of the Hommage series. Very nice fruitiness here, a hint of small red berries - cranberry and redcurrant - as well as a real lemony freshness. A touch of creaminess from the lees ageing before lots of bold orange flavour, and again that lovely freshness and elegance that is the hallmark of Deutz.
(2018) A blend of 65% Pinot, 30% Chardonnay and 5% Pinot Meunier from vineyards in Aÿ, Avize, Bouzy and Ambonnay. It has real meatiness and richness, the 10 years of ageing has certainly developed more depth, a little nutty oxidative character, but the overall style is still fresh. It finishes very dry, a pithy quality, very gastronomic with some yellow plum tartness but sweet fruit ripeness, finishing pure and long. No UK stockists quoted at time of writing.
(2018) Much less creamy in character on the nose, more austere, a little more taut and perhaps slightly more herbal, with that streak of savoury and lemony meatiness, again a little nutty character. In the mouth a very classic style, a very gastronomic style, in contrast to Amour 2006’s charming fruitiness. Superb structure and complexity. But the Amour is so lovely...
(2018) Lovely Chardonnay freshness, an almond and gentle mealy quality, that touch of Umami meatiness is there from the long lees ageing. In the mouth deliciously mouthfilling, a little sweeter and more fruity in character than the William Deutz 2007 tasted before it. Lovely lemon and juicy red apple acidity, but that creaminess is there.
(2018) This certainly has more creaminess and an elegant white fruit character, but there is suppleness immediately suggested on the nose, that pillow of cream and gentle oatmeal. The structure on the palate is all framed around the acidity, again a savoury, quite tight character that is complex and gastronomic, but fruit is delightful, open and this is still juicy and so attractive.
(2018) Interestingly, this 2002 Amour has a little more of the Cuvée William character perhaps, a touch more austere than the 2006, white flower and citrus, the almond and oatmeal still there, but a little leaner aromatically, arguably more serious. The palate is superb, a touch of spice and tobacco almost, creamy and caramel notes, a more luscious texture and concentration, then the juicy citrus and tangy zestiness comes through so beautifully.
(2018) Big, complex nose, a touch of bruised apple and pear, with plenty of that savoury Umami character, with again truffle and ripe nutty English apples. The palate deliciously complex, but so approachable with almost 20 years of age: nutty and sweet fruited, but has loads of concentration and biting character of the taut acid and that structure. Disgorged 2012.
(2018) A lovely nose, very clear, very crisp and brightly focused, with a little of that developed meaty Umami showing though, with a hit of truffle and lovely Chardonnay fruit still; a touch of yellow plum or peach to the citrus. Long, and beautifully focused into a long finish. Disgorged 2009. Stockist quoted is offering magnums at £440 at time of writing.
(2018) Fabulous nose, a little complex sulphide character, so mineral and flinty, adding to the russet apple and those complex white flower and delicate nutty characters. The palate is tight as a drum, with lime and grapefruit driving the acidity, but a sense of burgeoning richness hangs from that spine of acidity, meaty and concentrated, with such a dense and supple fruit concentration, sweet and powerful and profound. Disgorged 2012.  There are no UK stockists for this vintage listed at time of writing.
(2018) Like opening a bag of fresh ceps, so much clean sweetly earthy mushroom and the gentle almond-touched Chardonnay fruit. The palate has more of that fresh-sliced cep character, it has perhaps traded some of that mealy creaminess for this mushroom and tight, very crisp acidity, but such an intriguing and lovely wine.